Experimental Design. Three trials were implemented across the upper southeast coastal plain cotton production region in 2016. The trial locations were Tidewater Agricultural Research Center in Suffolk, VA (Suffolk), Everett Farms in Southhampton County, VA (SHC), and the Peanut Belt Research Station in Lewiston NC (LEW). The study was a randomized complete lock design with four replications of each treatment. Treatments were applied to four row plots measuring 35 ft. in length and 12 ft. wide. Prior to planting a composite soil sample was taken at 0-6, 6-12, 12-24, and 2436 inch depths and analyzed for soil ammonium and nitrate concentrations using a 2M potassium chloride (KCl) extraction procedure. All other nutrients, except N and S, were applied based on soil test recommendations and/or extension recommendations for North Carolina and Virginia cotton production. 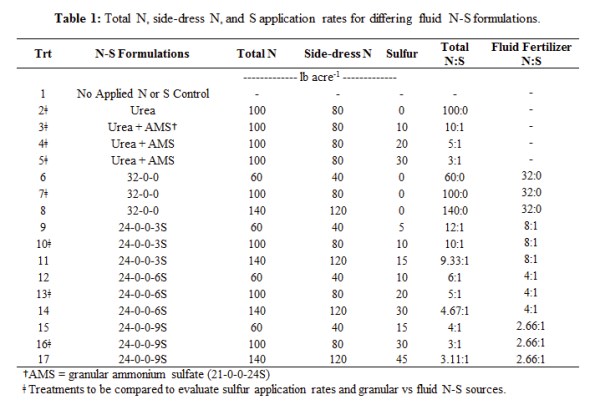 There were a total of seventeen fertilizer treatments (Table 1). The primary fluid N sources were urea ammonium nitrate solutions (28-32% UAN) and granular urea. A bulk blend of granular urea and ammonium sulfate (AMS) was applied at 100 pounds of N per acre with S rates ranging from 0 to 30 pounds S per acre (Treatments 2-5). The granular fertilizers were spread uniformly over the plot area by hand. The total N application rates for the fluid NS sources were 60, 100, and 140 lbs. N per acre (Treatments 6-17). Nitrogen was applied in split applications with 20 pounds N per acre applied at planting and the remaining N applied at the 1st square stage of development. To achieve the varying rations of N:S solutions, UAN was mixed with ammonium thiosulfate (ATS) (120-026S). Ammonium thiosulfate was chosen for its high S concentration over AMS solutions (8-0-0-9S). The four ratios applied were S,8:1,4:1, and 2.66:1. The analyses of each fluid N-S side-dress fertilizer material were 32-0-0, 24-0-0-3S, 24-0-0-6S, representing fluid fertilizer formulations currently feasible using UAN and ATS solutions (Tom Fairweather, personal communication). The fluid fertilizers were applied using pressurized carbon dioxide system mounted on a four (36-inch) row applicator outfitted with coulters/fertilizer injection knives approximately 6 inches to the side of the row. All N sources were treated with the urease inhibitor N-(n-butyl) thiophosphoric triamide (NBPT),to minimize any ammonia volatilization from surface applied urea based fertilizers.

Preplant Soil Nitrate and Ammonium Sampling. Prior to planting, soil samples were taken from each site. Six to ten cores were taken per location. Samples were taken at 0-6, 6-12, 12-24, and 2436 inch increments to be analyzed for ammonium and nitrate. The soils were air-dried and extracted with 2M KCl.

Tissue and Petiole Sampling during Bloom. During first week of bloom twenty-four cotton petioles and leaves were sampled from the first and fourth rows of each plot. Research in Virginia has shown that petiole and leaf nutrient concentrations have a higher correlation to yield during the first week of bloom than later sampling intervals. The petiole and leaf were sampled from the fourth mature leaf below the apical meristem (bud) down the main stem. Cotton petioles and leaves were separated immediately to ensure accuracy of nutrient concentrations. Petioles and leaves were dried at 65 degrees C and ground to pass 1 mm and 0.5 mm sieve sizes for petioles and leaves, respectively. The petioles were analyzed for nitrate-N, phosphorus (P), potassium (K), and sulfur (S) and leaf tissue underwent a complete nutrient analysis at Water’s Agricultural Laboratory (Camilla, GA).

Defoliation and Lint Yield. Defoliation timing of cotton varies, depending on the growing season and development of the crop. The cotton during this trial was defoliated when 40-60% of the bolls were opened. This timing was based upon treatments with a total N application rate of 100 pounds N per acre. High N application rate can delay maturity in cotton. However, given that the upper southeast coastal plain falls within the northern latitudes of the U.S., cotton production, any delay in maturity can be detrimental to the crop yield. This range in percentage of open bolls will allow for some adjustment based on the development of the crop during the study, but falls within the recommendations for defoliating cotton in Virginia and North Carolina (Edmisten, 2012; Wilson 2015).

The cotton from the center two rows was harvested with a Case International two row cotton picker. Seed cotton was weighted from each plot, then a onepound subsample was taken and ginned to determine lint turnout. Lint yield will be calculated from the percent turn out from the ginning process and seed cotton weights from the harvested rows. The ginned lint was sent to the USDA cotton quality lab in South Carolina for lint quality analysis. The lint was analyzed using a High-Volume Instrument (HVI), where length (stable), strength, micronaire, color, and leaf (trash) grade were determined.

Statistical Analysis. The statistical analysis of the experiment included a regression analysis and analysis of variance (ANOVA), conducted using SAS 9.2 (SAS Institute, 2009). The data set was separated in order to conduct the appropriate statistical analyses, based on treatment design, to determine the effect of S fertility on NDLVI, petiole and tissue S concentrations, and lint yield quality. The first dataset compared granular NS fertilizers to fluid N/S fertilizers with varying S application rates at a fixed N rate of 100 pounds N per acre. The treatment design for the first dataset was a 2X4 factorial design with two N/S fertilizer sources and four S rates.

The N/S fertilizer sources were blends/ formula-tions of granular urea+AMS and fluid UAN+ATS solutions. The S rates were 0, 10, 20, and 30 pounds S per acre for each fertilizer source. Fisher’s LSD mean separation procedure was used to detect treatment differences at: a = 0.05 level of significance. Regression analyses were used to describe the response of each dependent variable to increasing S application rates. The second dataset compared the interaction of N rate and S rate using N-S fluid fertilizers with varying N:S ratios. The treatment design for the second dataset was a 3X4 factorial design with three total N rates and four N:S fluid fertilizers.

General comments. The 2017 growing season had more favorable weather for cotton production than 2016, particularly during the boll opening /defoliation period of the growing season. Yields in Virginia averaged over 1,100 pounds of lint per acre and were the second highest production year in Virginia’s history. Yields across all locations were high with the highest yields reported at the Southampton location in 2017. There was no substantial period when rainfall or soil moisture was limiting at any location. Due to seed availability of Phytogen 499 WRF, the variety planted across all locations in 2017 was Phytogen 450 W3FE. This variety was chosen due to its similar maturity and performance in the 2016 Virginia cotton official variety trials. However, this variety was variable in its performance across locations and its environment. Large differences were found in plant available nitrogen (PAN) (soil ammonium-N + nitrate-N) in the top 36 inches of soil at each location (Table 2). The Lewiston location had the highest PAN among the sites with 12.3 ppm ammonium N and 15.2 ppm nitrate N, which would be equivalent to 55 lbs. N per acre of PAN prior to planting at this site. This is over 50% of the recommended N rate for cotton in Virginia. Southampton had the lowest PAN of any location with an equivalent N rate of 14 lbs. N per acre prior to planting. 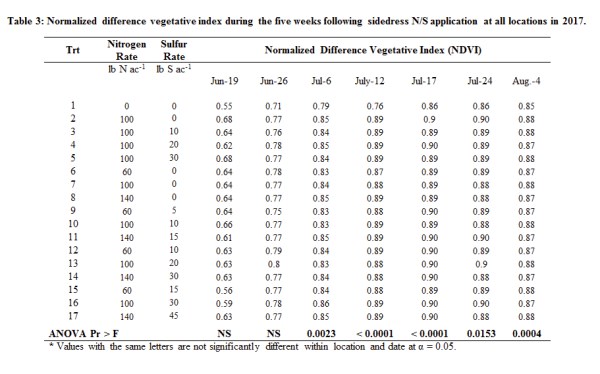 Differences in NDVI were more were more prevalent early in the growing season, differences becoming limited later in the growing season (Table 3). Once the cotton closed the row middles the biomass, with a handheld sensor, saturated NDVI, thus only the unfertilized control was significantly different from the fertilized treatments. Visually, some greenness differences were observed visually, however, the handheld sensor and/or NDVI was not able to differentiate the visual differences. A sensor mount on a UAV might be a better option for measuring reflectance on cotton, as the higher altitude will prevent sensor saturation due to a large canopy near to the sensor. 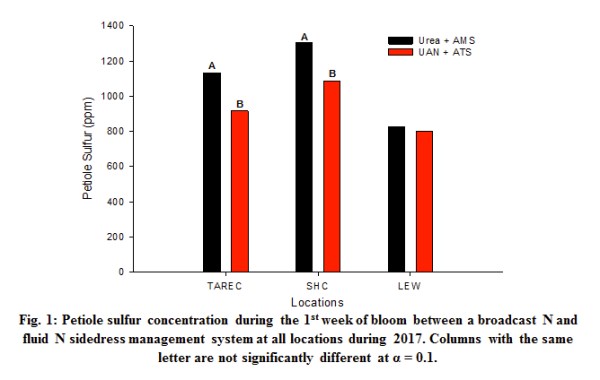 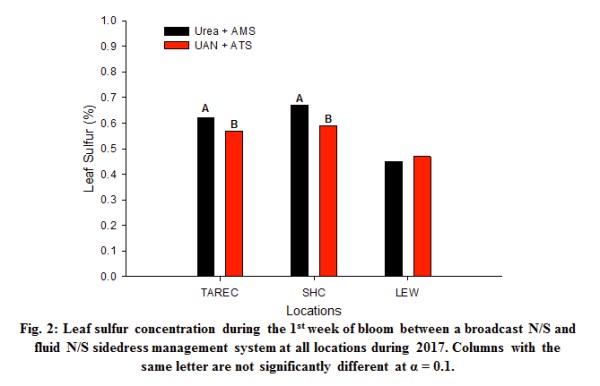 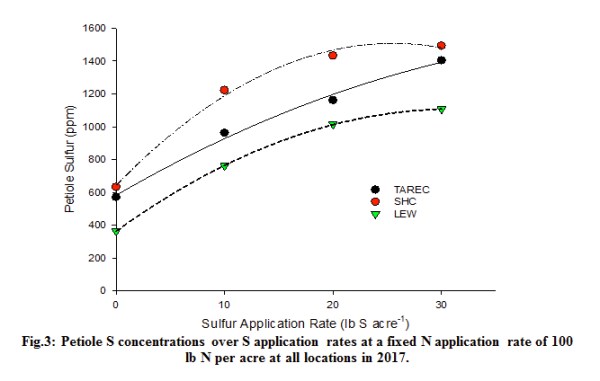 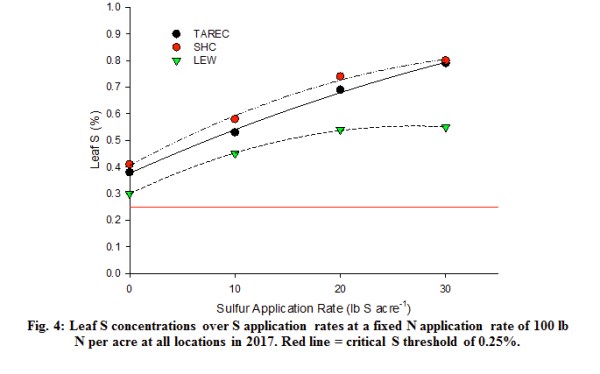 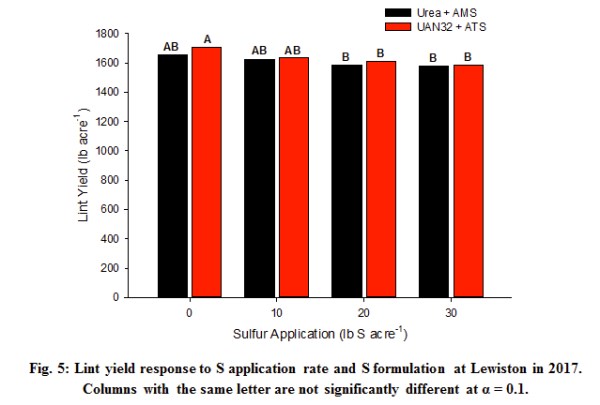 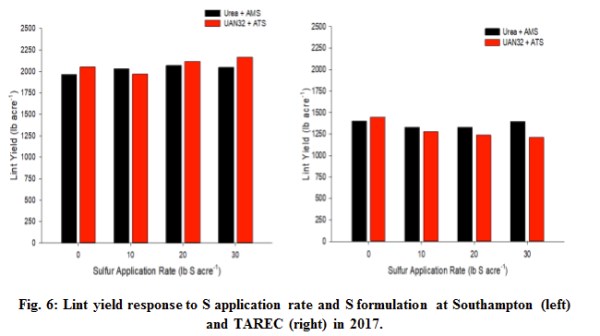 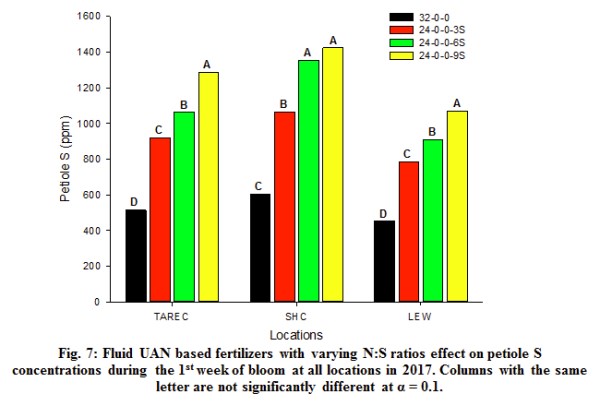 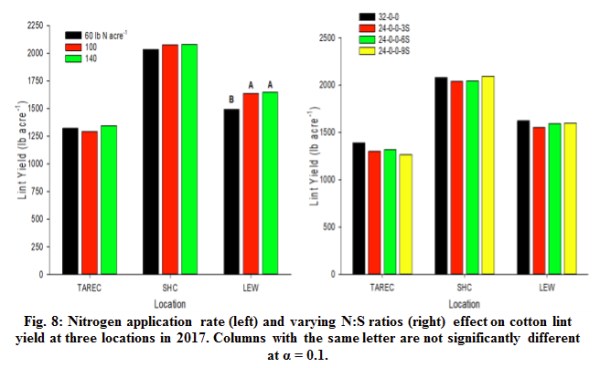 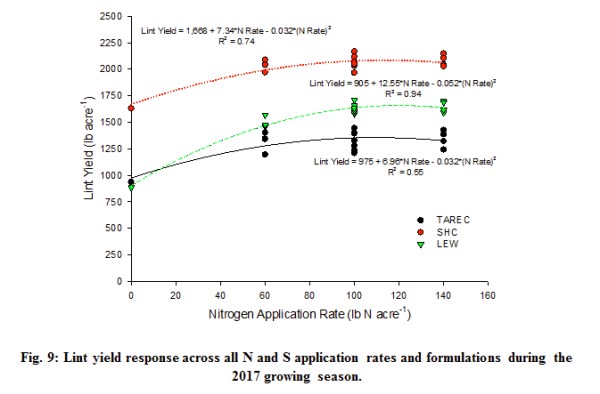 The second half of the study focuses on the use of fluid N/S formulation with differing N/S ratios to supply adequate S at lower N application rates. All three locations were very responsive to fluid N/S formulations with increasing petiole S (Figure 7) and leaf S concentrations (data not shown) as the S analysis of the fluid N/S fertilizer increased. Petiole nitrate-N: Petiole S and leaf N:leaf S ratios were significantly different at two out of three locations for the petiole ratio and three out of three for the leaf ratio (Table 4). The petiole N:S ratio was very low at 60 lbs N per acre application rate, and overall, lower than the other locations. Leaf N:S ratios were consistent across locations in 2017, which may be indicative that leaf N:S would be a more consistent predictor of S status. Lower N application rates and higher S analysis of the fertilizer resulted in lower petiole and leaf N:S ratios across all locations (Table 4). The increase in leaf and petiole S concentrations indicate that cotton was taking up the added S, however no lint yield responses were observed by increasing the S percentage in the fertilizer blend. Lewiston was the only location in 2017 where ling yields differed among the three N application rates (Figure 8). The 100 lbs. N per acre rate maximized yields at the Lewiston location, whereas no response to N application rate was observed at TAREC from 60-140 lbs. N per acre (Figure 8). There was a slight increase in lint yields at the Southhampton location, though this increase was not statistically significant (Figure 8). When lint yield was regressed over all N application rates and N/S combinations during 2017, the optimum N rate was found to be 100 lbs N per acre (Figure 9). However, each location had unique N response curves and yield levels during the 2017 growing season. There was no response to increasing the S content of fluid UAN solutions during the study in 2017. All locations in 2016 had a slight increase in lint yield from 32% UAN to 24-0-0-3S solutions. Soil types at each location during 2017 were heavier in texture and may have had S contributions from the subsoil where leached S may be retained. All soil samples were from the past six site years. This will allow inferences to be made about S contributions from the subsoil and predict when applying S will be needed to achieve optimum lint yields in cotton. 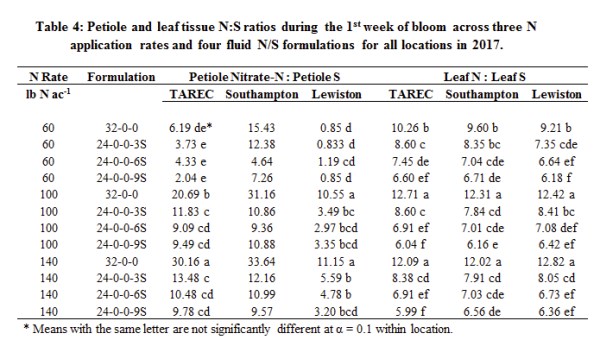 Overall, the 2017 growing season was marked by favorable weather conditions and high lint yields across locations. The cotton variety selected for 2017 showed increased variability in lint yields across environments, though lint yields were satisfactory. Also, this variety did not perform well in the 2017 Virginia cotton variety testing program, thus in 2018 another variety may be selected that is a more consistent high yielding variety across environments. Tissue S concentrations were very responsive to N and S application rates during 2017. The broadcast (dry) N/S management system produced higher petiole and leaf S concentrations compared to fluid N/S sources. Nitrogen rate was the most limiting nutrient at each location during the study and lint yields were maximized at 100 lbs. N per acre across locations, regardless of yield potential. No response to S was observed during 2017. This may be due to varietal S usage or the mining of S from heavier textured subsoil where S has been leached from sandy loam surface horizons. Soil samples taken for PAN analysis will be sent off to determine S availability in lower soil horizons. The differences observed between 2016 and 2017 indicate environment and soil type play critical roles for N/S management in cotton. Sandier soils will be selected during the 2018 growing season to ascertain the effect of soil type on N/S management in the upper Southeast coastal plain.