Urea-ammonium nitrate solution (UAN) Variations in pH and specific gravity can wreak havoc on your UAN blending processes.  Reasons for the variations vary, but it is prudent to be aware of what you are dealing with so that you can produce a viable end product.

Nitrogen production begins with the re-formation of natural gas to produce ammonia, thus natural gas constitutes 70% of the cost of ammonia production.  Ammonia then is cracked and further made into nitric acid and other nitrogen products such as urea and ammonium nitrate; this makes natural gas one of the raw, precursor molecules for all nitrogen materials, providing the hydrogen.  This process applies to both liquid and dry nitrogen products, but in this discussion we are addressing the urea ammonium nitrate (UAN) combinations which have seen an increased demand in liquid markets.

What has occurred since the 1980s is that domestic natural gas prices have increased in cyclical swings which at times increased significantly the cost of all nitrogen related materials, including UAN.  This was further compounded by extremely low cost natural gas in many other parts of the global economy.  In the last 30 years, many of the major nitrogen producers acquired smaller companies and, due to those higher natural gas costs, then closed or moth-balled the smaller, less efficient production facilities, significantly decreasing North American nitrogen production.  Due to less domestic production, import nitrogen materials have continued to increase and today are well over 50% of our total nitrogen consumption.  It has only been in the last few years, due to major reserves being located throughout the northern tier of the United States, that natural gas prices have fallen low enough to start discussions on the building of new nitrogen facilities in North America.

With the loss of production and production personnel due to retirement and an increased volume of solutions being imported on the international market, we are seeing observable variations in the ratios of urea to ammonium nitrate.  It is fairly common for import UAN to be of higher analysis than 32%, sometimes lower.   It is sometimes being cut with water, but this is not a refined application so there are observable variations in pH and gravity from transfer from ships and transfer equipment to dealers.  In some cases, the addition of anhydrous ammonia is used to meet grade or possibly as a corrosion inhibitor.**  The problem that is created by the addition of free ammonia to meet grade or for corrosion inhibition is that there are observable broader ranges of pH in all products of UAN produced.  In addition, there are also broader ratios of urea to ammonium nitrate, depending upon producer.

One major liquid fertilizer product mixed with UAN is ammonium polyphosphate (APP) as either 10-34-0 or 11-37-0.  The blending of these two components tends to be done in the early to mid part of the growing season.  What has been observed over the last decade are continued cases of solidification of these two materials when co-mingled in several typical fertilizer blends.  In all cases that have been studied where individual components UAN and APP could be tested individually, it has been found that the pH of UAN is higher than typical MSDS data sheets indicate.  In that time span, UAN has been tested and found to have a pH range of from 6.8 to 9.2.

While the production of UAN and formulation of UAN and analysis can be reached by a number of different ways through nitrogen ratio addition products, the products that UAN may be blended with do not allow for such significant ranges in pH.  This is true not only of mixing with ammonium polyphosphates but with some minor nutrient components as well.  It is recommended that when receiving UAN, two tests should be used to determine potential issues with UAN usages in blending, especially in early spring weather.  The first is the use of a hydrometer to check specific gravity for concentration, and the second is testing the pH within some relative degree of accuracy for blending compatibility.  This important information allows the user to be aware of variations in advance so that adjustment can be made for grade or when co-mingling certain other products.

The following is a picture of a tank manway from spring of 2012 that was opened within a few hours of blending UAN and polyphosphate and was then not flowable enough to be pumped out of the tank.  As is seen in the picture, these two products solidified quickly.  This tends to happen more often at the first to mid part of the planting season when dealers are receiving loads of material that are not being mixed with other volumes but almost immediately being blended and going to the field for application.  One recommendation may be to allow enough volumes to be laid into storage to allow for pH and slight gravity variations. 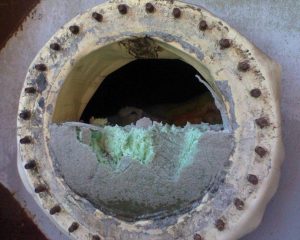 Variations in the formulation of UAN have been on-going since the inception of the process.  It seems to occur more often with unseasoned personnel or when not enough volume is in the storage tanks to minimize ratio variations and/or free ammonia and product is shipped out immediately.  In the past, some manufacturers of UAN have, in fact, had UAN summer blends and UAN winter blends, seasonally altering the ratios of urea to ammonium nitrate.  When one thinks about that, the product is relative to the location of the facility involved, whether it is located in a northern climate or a southern one.  Take time to familiarize yourself with the product you are receiving.

Another factor affecting UAN-APP compatibility is simply the overall solubility when UAN and APP are directly blended together (no additional water), especially during times of the year when product and air temperatures are cold.  While UAN and APP are generally thought of as completely compatible, the solubility of the UAN-APP system is drastically affected by the ratio of UAN to APP in the blend. Figure 6 presents the UAN-APP-KCl solubility diagram developed by the National Fertilizer Development Center (NFDC-TVA) during the early years of the fluid industry. The portion of the graph circled in green (left side of triangular diagram) illustrates that total nutrient solubility (N + P2O5 + K2O) decreases drastically as the proportion of UAN increases in UAN-APP mixes while the potential for precipitation formation increases (forming less soluble ammonium tri-polyphosphates). This problem rarely occurs when 28 percent UAN is used for these mixes rather than 32 percent UAN and occurs more frequently for 11-37-0 APP than for 10-34-0 APP. Previously discussed variations in UAN product analysis, pH and urea:ammonium nitrate ratio makeup further increase the potential for unanticipated compatibility issues. 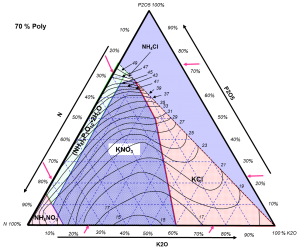 This  information not to point blame or liability, it is for education and understanding for all dealers and wholesalers to better understand the problematic issues that can occur with even the simplest blending of UAN and polyphosphates.