Risks and Effects on Agriculture

The 2017-18 growing season in South America has, for the first time in a few years, seen significant weather issues that have impacted yields. The Brazilian Monsoon was a bit late in getting started at the end of 2017, which slowed planting of the first crop of soybeans. Once the rains got going, regular precipitation and a lack of extreme heat in Brazil throughout the first part of the growing season has led to another large crop. Most estimates have the soybean crop between 113 MMT to 117 MMT, making this either the largest or second largest crop in Brazil’s history. Harvest of the first crop of soybeans is about 10% off last year’s pace, but right in line with the 5-year average. Brazil’s primary safrinha (second) crop is typically corn, but delays in planting and a push to plant more cotton will reduce Brazil’s corn production this year.

A weak La Nina played little part in impacting Brazil’s rainfall, but it did have a larger influence in Argentina. Persistent ridging in the jet stream led to a 90-day rainfall deficit that topped 150-200 mm for Cordoba and Buenos Aries provinces, which is about half the normal amount of rainfall for December through March. Soybean and corn yield estimates have been lowered with each report as Argentina’s growing season progresses, and even if rains do return in late March and April, it is too late to save this crop and return yields back toward trend values.

Winter 2017-2018 has been a wild ride (as usual) for the US. After repeated bouts of Arctic air in late December and the first three weeks of January, February was quite warm for the east coast while the western states (especially Montana) fell back into below average temperatures. At times, the polar vortex weakened and was displaced over the Northwest, allowing for early summer warmth to move north along the east coast. This flow pattern also brought repeated rounds of rain to eastern Texas, eastern Oklahoma, Arkansas, southern Missouri, Tennessee, Kentucky, southern and central Illinois, Indiana and Ohio, which relieved drought in this area but also created a lot of problems with flooding. Rivers in these areas are in flood stage to start March and soil moisture content is very high. This area must be watched carefully through Spring as planting begins because any rainfall over this area will cause planting delays due to nearly saturated soils. Meanwhile the panhandles of Texas, Oklahoma, and southern Kansas have been exceptionally dry. Most of this region has not had precipitation over a quarter of an inch since early October 2017. There are major concerns over the quality of the winter wheat crop as it comes out of dormancy this spring if the drier pattern continues. To end this drought this spring, we will need to see a shift in the jet stream to favor a trough over the 4-corners states. Unfortunately, long range forecasts are not keying in on that pattern evolving through the first half of March, and if it does evolve in April or May, a 4-corners trough means big severe weather outbreaks in the Central Plains.

Drier conditions also extend across the coastal southeast in the cotton and peanut belt as well as across eastern Montana and the Dakotas. Remember though, that this region has frozen soil, and the snow cover will melt over the next 45 days, increasing their soil moisture. The mountains out west have above average snow water content in Montana, Idaho, Wyoming, Washington, and parts of Colorado. But in California and Oregon, snow water content is below 75% for most reporting stations. California has been dry during winter, which has allowed drought to creep back into the state over the last two months. When it does precipitate, many locations that burned this past summer are suffering from major mudslides.

Spring outlook. April 2018 is forecast to have a very active jet stream (which is good) and it will feature cooler weather for both the east and west coasts to start off the month. Although there will be frequent low-pressure systems crossing the US, the central US is forecast to carry a slight warm and dry bias with wetter conditions on each coast. The forecast for dry weather in the central US has led to a lot of fear that the wheat crop will continue to get worse, but all it takes is a small shift in the jet stream to bring beneficial rain to this area. April is typically very wet and stormy at times across the Central Plains, but a forecast for drier conditions for this area is very significant for US corn, soybean, and wheat production. The corn-belt needs to watch this area very closely in the coming weeks, because if the drought survives into late May, it has historically transitioned north and east out of the Plains into the corn-belt. 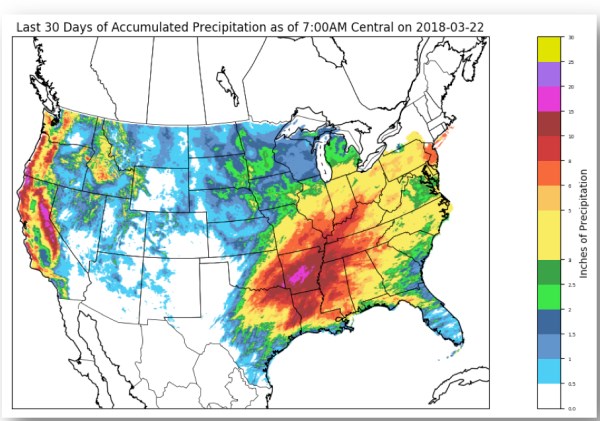 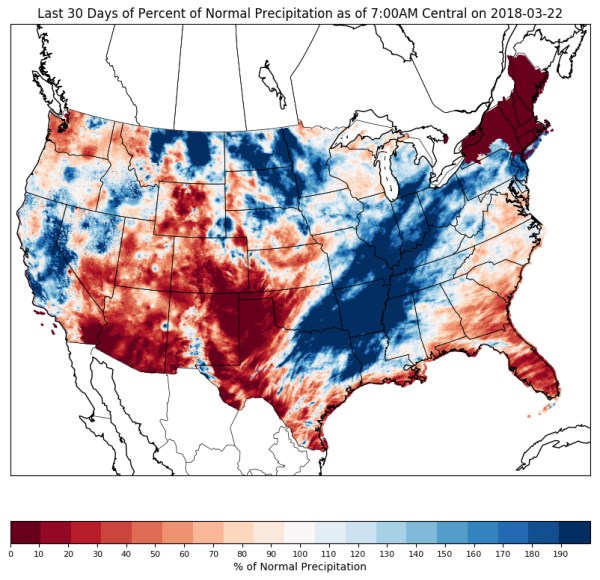 This lack of agreement has a lot of meteorologists focusing more on the short-term fluctuations to see how the pattern sets up for April and May. Please remember, spring rains can easily erase winter drought.

We need to watch the Northern Plains very closely this spring. Long-range guidance keeps this region cooler than average for March through May. Historically, cool and wet springs in the Dakotas lead to an increase in prevent plant acres. The last 3 years have had below average prevent plant acreage due to favorable spring temperatures. Be watching the short-term forecasts to see how the remainder of the winter shapes up in the Dakotas

In Europe and eastern Russia (Black Sea region), a warm and wet winter transitioned over to bitterly cold temperatures due to a large blocking high pressure system over Greenland at the end of February. A volatile weather pattern is forecast for this area through the first half of March.

Summer 2018. There is a lot of worry, which is typical this time of year, about summer heat and drought. Four very good years of high yields have many thinking “we are due” a bad year. We have to be careful of making these kinds of assumptions as the law of averages does not apply to corn yields, but there is cause for concern. First, guidance from both the European and US models suggest drier summer conditions developing in the central US and Midwest in June.

While these models historically have not performed well at 3 to 6 month forecasts, there has been consistency in their predictions, which is cause for concern. It is challenging to find a good analog year for 2018, given how winter has shaped up so far. But with a fading La Nina, drought already established in the central US, plus long-range guidance from the dynamical models pointing toward less than ideal summer growing conditions, there is a lot of discussion about the potential risk for below trend yields this year. 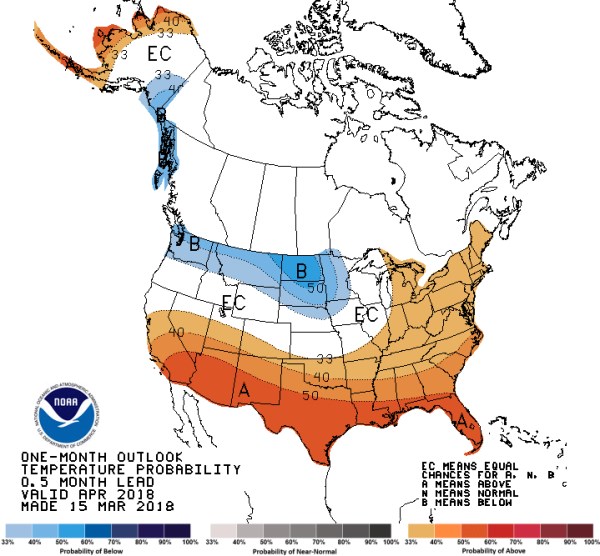 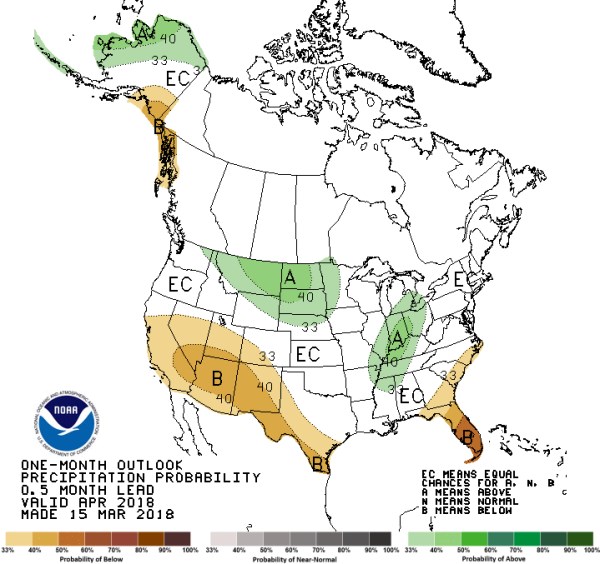 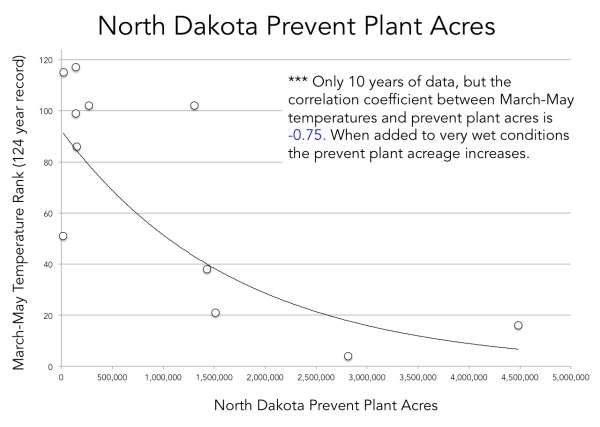 It is too far out in the forecast to say with any certainty what summer will bring. Plus, remember that corn and soybeans are tough plants that require substantial and sustained deviations from normal weather conditions before they show signs of stress. So, what do we need to watch? We need to watch for blocking weather patterns to evolve in June, July, and August. The most common type of block is a ridge in the jet stream and historically the development of a ridge over Iowa, Minnesota, Wisconsin, and Illinois leads to largest negative impacts on corn and soybean yields. Forecasting the position of this weather feature months in advance is impossible. But predicting the evolution of a ridge 10-30 days in advance is possible, and during summer market prices move dramatically on the forecasts of the position of the ridge. Watch for troughs to develop in the Gulf of Alaska and north Atlantic in summer, as these features often lead to hot/dry conditions in the Midwest. We need to also watch for cooler ocean temperatures along the west coast of the US and Mexico, as these are correlated with summer heat in the Midwest. 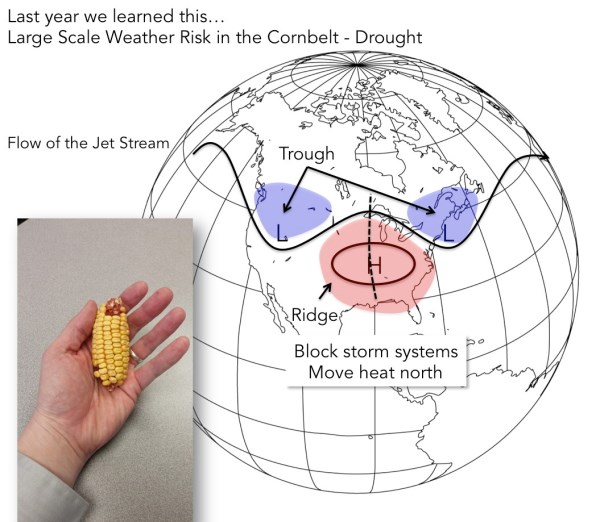 Figure 7. Jet stream pattern that leads to drought and heat in the cornbelt. Source: Snodgrass

Figure 8. Summer weather patterns to watch for potential heat and drought in the cornbelt. Source: Snodgrass 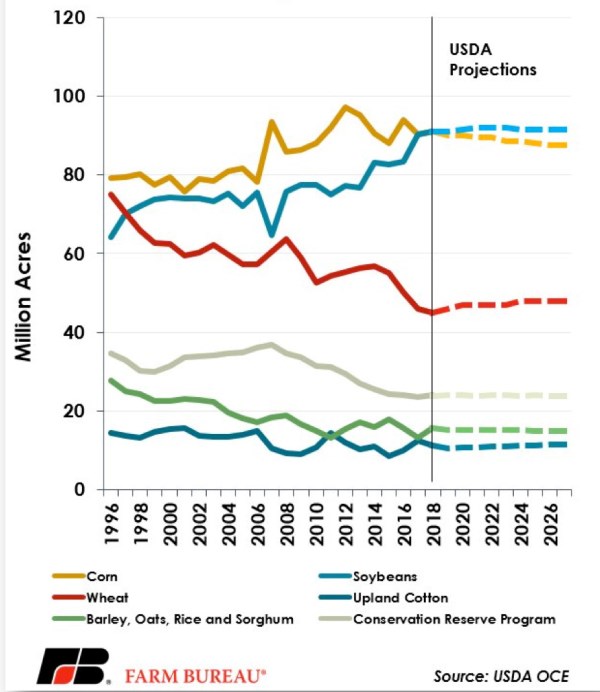 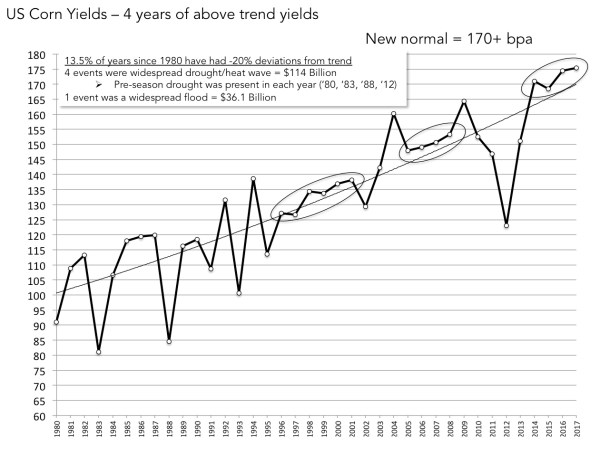 Figure 10. Historical corn yields in the US. Source: USDA NASS

Finally, really warm ocean temperatures in the western Atlantic and Gulf of Mexico, combined with a westward propagating Bermuda High, can signal heat in the corn-belt too.

Big trends. US corn and soybean yields have steadily risen for decades as seed technology, herbicides, pesticides, advanced fertilizers, precision planting, and other ag tech has made us more efficient at farming. Trend line yields for corn in 2018 will top 170 bu/acre, and soybeans will near 50 bu/acre. The true potential for both is much higher! Remove 2012 from those trend lines and the average US yields go over 174 bu/acre and 52 bu/acre, respectively. In addition to this, we are seeing a lot of acreage in the Dakotas converting from other crops (like wheat and barley) to corn and soybeans, which makes the northern Plains a larger part of the US production of both crops. The USDA is projecting that over the next 10 years that soybeans will be the largest US crop in terms of acreage, overtaking corn for the first time since 1983.

Dr. Eric Snodgrass is the Director of Undergraduate studies for the Department of Atmospheric Sciences at the University of Illinois at Urbana-Champaign.